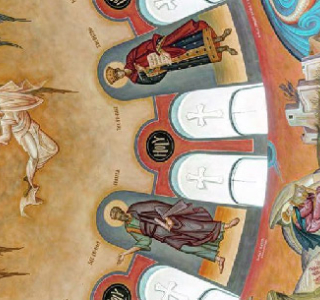 The Rev. Deacon James Childs was ordained to the diaconate in 2014 by Bishop Anthony of the Diocese of Toledo and the Midwest. Dn James and his wife, Sarah, have lived in Indianapolis since 2008. Sarah is a librarian, and Dn. James has worked various secular employment positions over the past decade. Dn. James graduated from Concordia University in Ann Arbor, Michigan in 1999, with a degree in the reading of Biblical Greek and Hebrew. He then attended and graduated from Concordia Theological Seminary in 2004 and served as Pastor of a Lutheran congregation for 2 years. In 2010, he also completed the St. Stephen’s Course of studies at Antiochian Village House of Studies in Ligonier, Pennsylvania.

Dn. James enjoys reading Biblical literature, Patristic writings, and classical mythology. He one day hopes God will grant him a spiritual sword, with which he will slay the demons of our modern age. A bit of a dreamer, Dn. James also enjoys classical music, 90’s hip-hop, Christmas carols, Gregorian Chant, and Byzantine chant, and often has melodies and lyrics running through his head and lips, attracting odd looks from passers-by. When he is not working or attending Church services, Dn. James challenges himself with calisthenics, weightlifting, and frequent hikes in local parks, contemplating the beauty of God in creation. One day, he may travel extensively.